Row over Andhra panel's report on Vizag as capital 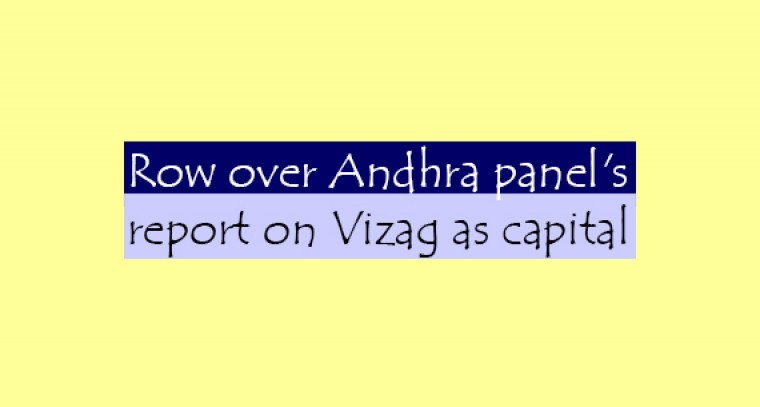 A row has erupted over the report of an expert committee constituted by Andhra Pradesh, which allegedly opposed Visakhapatnam as one of the three state capitals due to its vulnerability to cyclonic storms.

While the opposition alleged that the Jagan Mohan Reddy government kept the panel's report secret and pushed the coastal city as the executive capital, the government claimed that a section of media distorted the report and maintained Visakhapatnam is suitable to be one of the capitals.

A six-member committee comprising experts had last month submitted 147-page report to the government. According to reports in a section of vernacular media, the panel did not favour Visakhapatnam as the capital on various grounds.

"Visakhapatnam presents an eco-fragile zone with potential threat of severe cyclones, floods and rise in sea levels. It is compounded with CRZ (Coastal regulation Zone) constraints and coastline erosion. Infiltration of saline water into ground water table is a cause of concern. Oil spillage has been noticed several parts of the port. There are issues of industrial pollution including that from the steel plant and port related activities.

"The Metropolitan Region also poses a security threat considering the fact that the region hosts the Eastern Naval Command and possible (nuclear) submarine activities. Any major new governance activity is neither required from a settlement pattern point of view nor desirable under the constraints discussed," says the panel's report.

"Furthermore, substantial chunks of government lands are not available in and around the city. Several institutions are already awaiting land allocation. The location of the proposed airport in Bhogavaram (Bhogapuram) and the related activities also need review in the light of these constraints. The ongoing preparation for the Master plan for Visakhapatnam Metropolitan Region 2041 seems to have overlooked some of these considerations," added the report by the committee headed by former IAS officer G.N. Rao.

The excerpts of the report kicked up a row, a week after the Assembly passed two Bills to create three state capitals - Amaravati, Visakhapatnam and Kurnool. The move, however, hit a roadblock in the Legislative Council, dominated by the opposition as the Chairman referred the Bills to a select committee.

Irked over the development, the Assembly on January 27 passed a resolution to abolish the Council.

The three capitals decision was taken by the government on the basis of expert committee and Boston Consulting Group (BCG). The BCG also reportedly expressed concern on the vulnerability of Visakhapatnam to cyclones.

"Is Visakhapatnam going to be washed away," asked the minister and pointed out Chennai and Mumbai are also state capitals. "There is no threat to Vizag. In fact there is flood threat to Amaravati," he said defending the government's move to shift key capital functions from Amaravati to Visakhapatnam and Kurnool.

Rao also addressed a news conference to clear the air. He claimed that what is published in a section of the media is only a part of discussion but not from recommendations or operational portion of the report. "We have analysed the strengths and constraints of Visakhapatnam, Machilipatnan and Vijayawada for the capital. The capital function was suggested to be set up in northern most part of Visakhapatnam city, far away from the core city and the sea shore," he said.